iKommunicate from Digital Yacht is a radical new gateway designed to get traditional marine electronics connected to the next generation of interfacing and the internet of things.  It was developed via a successful Kickstarter crowd funded project back in early 2016 and is now available as a consumer product.

NMEA 0183 and NMEA 2000 interfacing have been utilised for many years and are now the defacto interconnect standard for all major brands of electronics.  They are super reliable but relatively old fashioned in that they are slow and also complex for application developers to work with - like a dial up modem in a broadband age.  There are also legal issues with regard to certification and documentation which stalls innovative product development.  The next generation of marine interfacing will integrate more items like engines, switches, sensors and even other marine assets like buoys and marinas so a new standard is required.

Since 2012, a group of talented, boat owning developers have been actively creating a new open source interfacing protocol called Signal K.  The new iKommunicate gateway from Digital Yacht acts as a gateway from traditional NMEA based systems to the new Signal K platform allowing existing boat electronics to integrate with the next generation of connectivity.

Signal K is an HTML5 "web ready" JSON based data format, that makes web and mobile app development really simple - even for amateurs.  Apps can be written in minutes and data viewed in a browser.  For instance, NMEA 2000 engine data such as fuel flow, temperature and pressure could be logged and then analysed for any trends indicating an engine service requirement.  Internet integration is also easy with all sorts of social media possibilities using Twitter and Facebook for logging and tracking. iKommunicate can also act as a simple on board  webserver so PDF manuals can be stored and viewed as required. Files can be stored on the integrated SD card reader.

iKommunicate features 3 NMEA 0183 interfaces and 1 NMEA 2000 interface so there's plenty of connectivity.  It has a built in webserver and ethernet port for easy connection to a wifi router so data can be shared with devices like tablets, Kindles, PCs and smart phones.  NMEA data is also made available on the ethernet port.  There are already many apps that are compatible including NMEA Remote, iNavX, Active Captain, and Navionics (for sonar charts)

iKommunicate is also simple to install. It's now available as a commercial product and is competitively priced at £220. It will be on show for the first time in the UK at the 2016 Southampton Boatshow, Stand J346.  More information at www.ikommunicate.com

Details on Signal K at www.signalk.org

DIGITAL YACHT 2016 IS ALL ABOUT NEXT GENERATION NAVIGATION, COMMUNICATION AND ENTERTAINMENT SYSTEMS FOR YOUR BOAT. BOATING SHOULD BE FUN, SAFE AND EASY AND OUR PRODUCTS INTEGRATE INTO EXISTING AND NEW BOAT NETWORKS TO BRING A POWERFUL DIMENSION TO YOUR ON-BOARD ELECTRONICS. 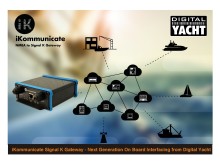 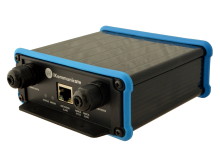 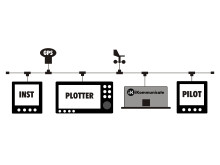 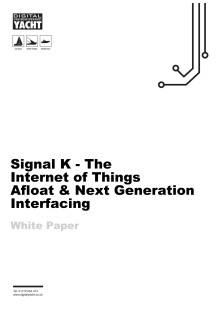