Running aground is every skipper's nightmare. We rely on our depth sounder and also the soundings shown on charts for navigation but with many surveys carried out in the distant past, isn't it time for better charts?

Sonar Server is Digital Yacht’s low cost wireless gateway from your boat’s NMEA depth instrument or fish-finder to a Smartphone or tablet running the popular Navionic’s charting app. The app now features the ability to redraw bathymetry based on live data streamed from your boat’s system.

The picture above shows just how well the system works

Before: This shows the dredged channel into the popular Parkstone Bay Yacht Club. The traditional charts just show it as a channel with no depth information

You sail: With Sonar Server installed we passed over the channel and you can see our track as the red line. In real time the charting is redrawn on the screen allowing us to reveal hidden depth contours

After: When we return ashore and our SmartPhone or tablet has an internet connection, data is anonymously uploaded to the Navionic’s server for reprocessing. A sophisticated algorithm compares and validates data and allows a new “Sonar Chart” to be created which is then available for all to download next time they update charts in their apps. This process typically takes a couple of weeks. The new data clearly shows some areas on the starboard side of the channel which may cause concern. It’s community boating at its best – as Navionics say, “if you want better charts, just go boating”

DIGITAL YACHT 2015 IS ALL ABOUT NEXT GENERATION NAVIGATION, COMMUNICATION AND ENTERTAINMENT SYSTEMS FOR YOUR BOAT. BOATING SHOULD BE FUN, SAFE AND EASY AND OUR PRODUCTS INTEGRATE INTO EXISTING AND NEW BOAT NETWORKS TO BRING A POWERFUL DIMENSION TO YOUR ON-BOARD ELECTRONICS. 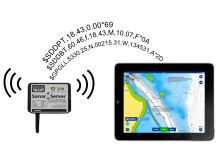 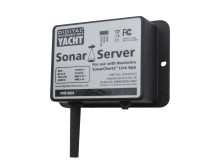