Digital Yacht will be exhibiting at Boot Duesseldorf 2014 Hall 11 Stand A34.  Innovation, is at the heart of what we do and 2014 will be an exciting year for Digital Yacht with the introduction of a host of new products. Listed below is a list of what's new at the show.

A Class B AIS transponder requires a dedicated GPS antenna as well as a VHF antenna or suitable VHF-AIS antenna splitter. The GV30 is a combination VHF/AIS and GPS antenna with twin coax feeds (10m). It’s fitted with a standard 1” threaded base so will mount onto a variety of deck, pole and rail attachments available from many 3rd party suppliers.  It's also supplied with TNC and BNC adaptors to fit our AIT2000.

PilotLINK is a wireless interface for Class A AIS systems. All Class A trans­ponders share a common “Pilot Plug” connector that PilotLINK connects directly to via a 1m cable. PilotLINK then creates a wifi navigation network on board the vessel which allows AIS and GPS data from the Class A to be sent directly to any connected mobile devices such as phones or tablets. It’s compatible with iOS and Android systems (depending upon app utilised) as well as PC & MAC based systems.

The WL450 is a smart wifi system with all the electronics encapsulated into its rugged 1m omni-directional antenna. It connects to PC or MAC systems via a simple network connection with power and data carried to the antenna via a thin ethernet cable. A 10m cable is supplied as standard with a 20m option also available. The WL450 is fitted with a standard 1” threaded base so it can mount onto a variety of deck, pole and rail bases available from many 3rd parties. The picture here shows it mounted with a 1” adjustable rail mount.

A SART (Search and rescue transponder) is a mandatory fit for live saving apparatus on all vessels over 300GRT. Traditional technology used a radar type device, but new legislation allows an AIS SART to be used with associ­ated performance and cost benefits. AIS SARTs positively identify the casu­alty and give a regular position update which can be graphically displayed on a Class A MKD, ECDIS or plotter.

This simple product makes for a neat RJ45 connection at the chart table.  With many Maxsea notebook users wanting to connect to NavNet networks, this is an easy to install and professional connector. Can also be used in cabins for network, data and telephone connections 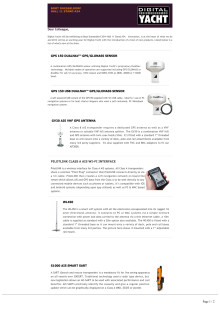 Digital Yacht will be exhibiting at Boot Dusseldorf 2014 Hall 11, stand A34. Here is a list of what's new at the show